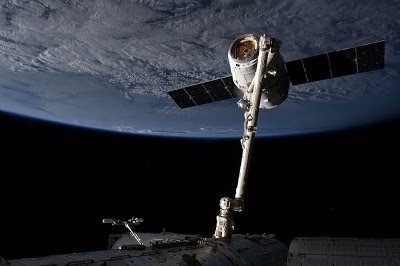 So I was reading this issue of Dinosaur Comics, one of my favourite webcomics here and the mouse rollover text was particularly hilarious:

OKAY HERE’S A FUN THING TO LEARN ABOUT: space is only 350km up! This means that if ‘xkcd’ author Randall Munroe were put into an appropriate orbit, the vast majority of humanity would be closer to him than to Australia. This statistic applies to both physical distance, and emotionally.

A bit of science, a bit of fun web comic rivalry.

But it got me thinking of a question I had in a buffer somewhere in my head. Space isn’t really that far away from us as we crawl around on the surface of the Earth. People think it’s far but if you look up at the night sky and watch a satellite speed overhead you can imagine there is no atmosphere between you and that it is really only a few hundred kilometers away. I know how far that is to drive, but what is it like to look 300km away? How far away is the horizon? That’s a good measure everyone in the world is familiar with but how does this compare with the distance to, say, the International Space Station (ISS)?

Another way to get as this is to find out where would you have to stand to look out across to the unobstructed horizon and know that this is the same distance straight up to 3–7 people living
in our favourite tin can in the sky?

The definition of space may be 100km up but the ISS is 370km above the Earth. I know because I asked Google and it answered me directly, I didn’t know they were doing that for distance questions. Neat.

Fine. So now we need to know how to determine the distance to the horizon. The higher you are the further the horizon appears since it’s really just the top part of the ball you can see from how close you are to it. A simple formula for approximately working that out is

Answering our question requires the reverse of this, we want to know how high of the ground we’d need to be for the horizon to appear 370km away. So we need

That’s high. Even if we took light bending through refraction in the Earth’s atmosphere into account the height would be 9,188 m. So lets say it’s about 10km and call it even. So you need to be standing roughly 10km above the Earth’s surface for the horizon to appear as far away as the ISS is above you.

Great, so let’s go climb a mountain, I don’t know anything about mountains.
If we then look up a list of the highest mountains on Earth we find, Mount Everest is only 8,848m high. So even from the peak of the tallest mountain on Earth the horizon would just be getting close to the altitude of the ISS.

Now of course, most of us aren’t going to climb Everest, but many of us do get in planes regularly. Coincidentally, or is it?, the average cruising altitude for long haul flights is between 30,000–39,000 feet or 9–12km. So if you are ever on a long flight across the ocean or continent and get a spot of no clouds you can look 350km in a straight line to the horizon and try to see what the distance to space really is.